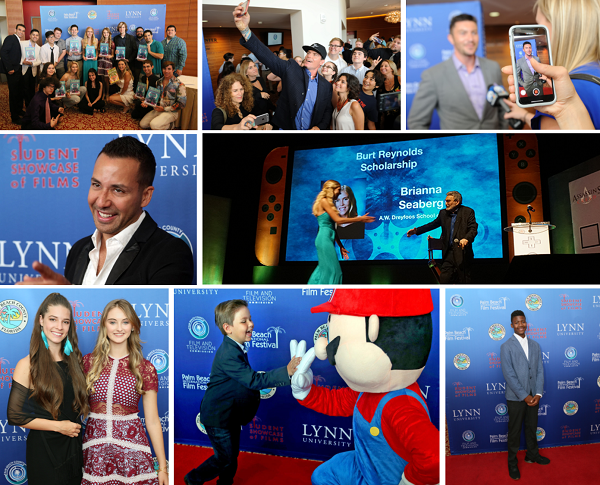 It was a record breaking year for attendance with more than 750 fashionably dressed students who traveled to Palm Beach County from across the Sunshine State to participate in the highly anticipated event. Parents, teachers, classmates, film industry leaders, celebrities, state and county dignitaries and film enthusiasts applauded the student finalists as they strolled the red carpet, enjoying the bright lights of excellence and fame.

Award-winning writer, producer and actor, Frank Licari, the Student Showcase host for the past 11 years greeted cheering students; Vanilla Ice (Rob Van Winkle) ramped up the energy stopping for selfies, granting interviews and posing for the cameras; Howie D. Dorough, a member of the Backstreet Boys known for huge hits like “I Want It That Way” and “As Long as You Love Me,” captured the crowd with his charm and charisma; and actor Chris Hayes, from the film “Divergent” among many others, escorted on the red carpet by video game characters Mario and Pikachu, enchanted all with his leading-man looks and fun personality.

This year’s theme was a dazzling display of video gaming. Popular characters Mario, Pikachu and Yoshi posed for pics as guests enjoyed virtual reality stations, X-Box systems, a video gaming room and big screens provided by the Microsoft Store Town Center Mall. The 2-hour live awards presentation featured singing, dancing, humor, surprises and poignant moments as winners were announced among the three finalists for every category. The new “Academy Award” format allowed for genuine emotion as students were called to the stage to accept their trophies.

Overall, more than 600 hundred student entries in 12 categories were submitted this year and judged by 42 leaders in the film industry across the globe.  The best rose to the top with these amazing 2018 Student Showcase of Films Award Winners:

About the Student Showcase of Films: