FROM SUPERMARKET TO SUPER ENGINES: ONE GRADUATE’S JOURNEY

(Palm Beach Gardens, Fla. – Dec. 10, 2018) When Eduardo Gilces graduates from Palm Beach State College’s Engineering Technology A.S. degree program this month, he’ll already have eight months under his belt at his dream job as a drafter/modeler for Florida Turbine Technologies in Jupiter. However, 19 months ago, his job at FTT—helping to design turbine engines for the aerospace industry—seemed like a dream that would never come true. 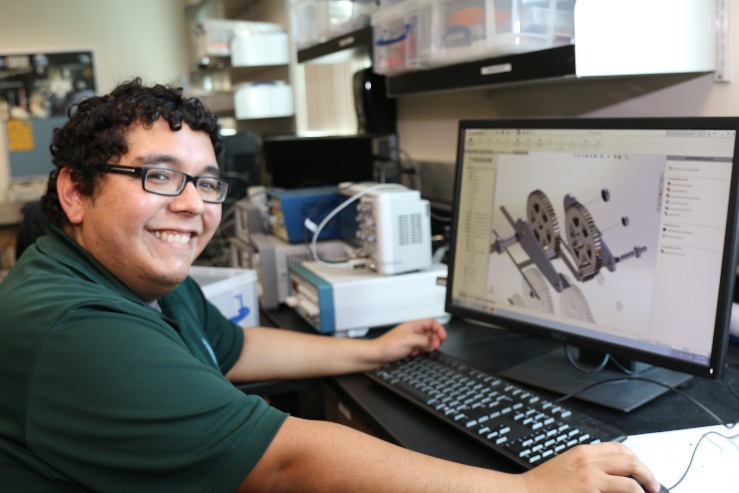 Back then he was paying his bills with a job in the produce department of a local Publix. While he spent his days stocking and cutting up fruits and vegetables, his ambitions lay elsewhere. As a teenager, Gilces, who is good in math, would play around with his civil engineer father’s computer-aided design software. He wanted to pursue an engineering degree after he graduated from PBSC with an A.A. degree in 2014, but universities had a slew of prerequisites for their engineering programs, and Gilces found himself overwhelmed.

That is until his friend and Publix co-worker, Thomas Garza, opened a door.

Garza had enrolled in a related PBSC program, Electrical Power Technology, and invited Gilces to come to one of the program’s events. There Gilces met Professor Oleg Andric, chair of the EPT program, who instead encouraged him to consider Engineering Technology, a program closer to his interests.

Soon everything came together for Gilces.

“I had a taste for engineering but didn’t know how to get into it and bring it all together into a career,” Gilces said. “This program seemed a much simpler kind of path, so I took a roll of the dice and signed up, not knowing too much, and now I’m working on engines. I love what I’m doing.”

He’s also getting good at it. Recently, he helped save a client from a costly manufacturing error.

“Eduardo contributed significantly to the tolerance study on a family of turbine blade profiles by identifying a number of discrepancies that we then took back to the customer,” said Dave Ohlschwager, product definition team lead at FTT and Gilces’ supervisor. “That’s where his value really came in because, even though he had limited experience with the customer and the components, he was able to understand something that’s very complex and bring it back to me in a way that was very clear.” 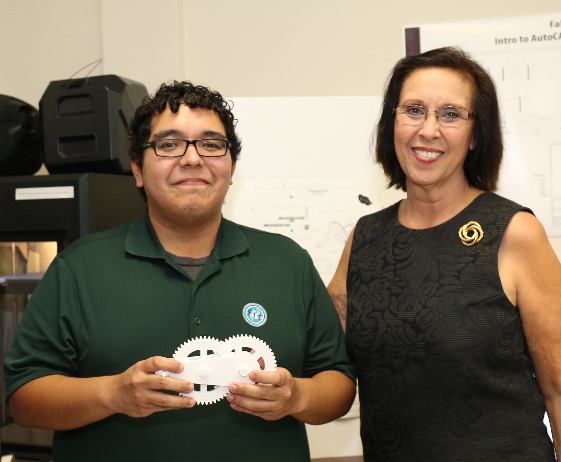 Gilces will continue at the company after his graduation on Dec. 19 and sees a bright future there.

“This is the beginning. FTT gives raises and promotions as long as you show the discipline for it,” he said. “They’ll switch me around to train with different engineers because they want me to broaden my horizons and will pay for me to keep going to school to get a bachelor’s and a master’s degree.”

Gilces, 26, grew up in West Palm Beach and graduated from Forest Hill High School. Looking far into the future, he speculates that he may one day teach at PBSC, like his professor and work colleague Eva Suarez, who is chair of the Engineering Technology program and holds a part-time position at FTT as a program engineer.

I’m very proud of Eduardo,” Suarez said. “He has overcome a lot of hurdles, and not only is he an exceptional student, I actually work with him at FTT, and there he’s also an outstanding employee. I have to give him so much credit for working and studying and exceeding expectations with the highest level of integrity and workmanship in both places.”

The Engineering Technology and Electrical Power Technology programs are hands-on, practical and closely related to industry, which allows students to see the connections and apply what they are learning. All students do internships, many of which lead to jobs. Gilces’ case was exceptional—FTT hired him on the spot.

Garza, who graduated from the EPT program in August, also transitioned successfully from an internship to a full-time position at Sikorsky Aircraft Corporation, where he is an instrumentation technician in its Development Flight Center. “The program truly changed my life. I’m in places I never imagined myself to be, and I know it’s only going to keep getting better for Eduardo, too,” Garza said.

“With our programs, it’s much easier to see the light at the end of the tunnel,” Andric noted. “Eduardo and Thomas would have been stuck with a much longer path to a career, and here it is much more direct.”

Andric tells the story of Gilces stopping by the school’s lab after his first day working at FTT last April. Classmates were asking how it went when Garza, recalling their days at Publix, said ‘Look at us. Imagine…the two of us were cutting fruit a year ago, and now both of us have jobs in the aerospace industry.’