Michael (Mike) Kitts ’03 received the Distinguished Alumni Award at Lynn University’s commencement ceremony May 11. He earned it for his work with the National Basketball Association’s Golden State Warriors and his dedication to the next generation of Lynn students.

No matter the challenge, Kitts’ actions reflect lessons learned at Lynn: ask great questions, be interested in others, develop a strong work ethic, be prepared and be present. In his words, “When you combine all of it, you will separate yourself.” 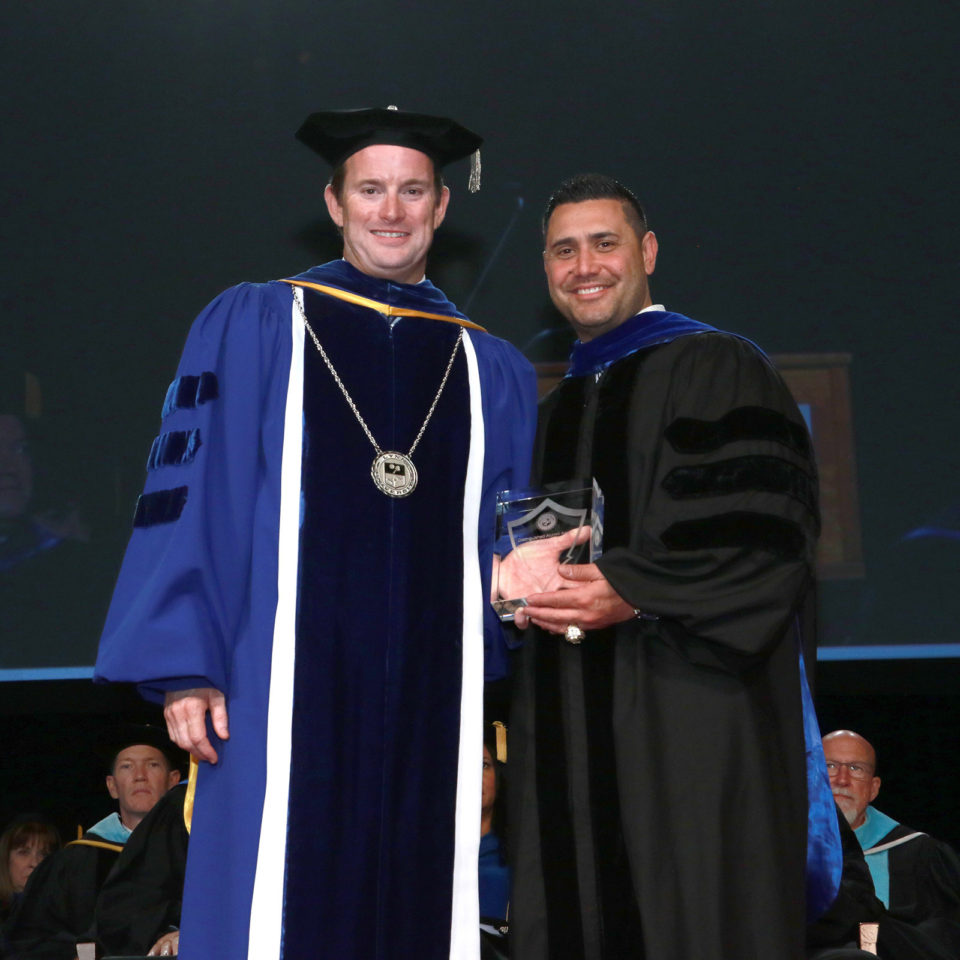 After graduation, Kitts landed at Jacuzzi Brands. In a career-defining moment—when Jacuzzi partnered with the Florida Marlins—he learned about sports sponsorships. “A lightbulb went off,” he said. So, he headed to San Diego State University and earned an MBA in sports business management before winning positions at Learfield, the San Diego Sports Commission and HSC Sports.

Kitts joined the Warriors in 2012. At that time, the team was struggling, but optimistic.

“The Warriors didn’t use the word good; only great,” he said. “I bought into the ownership group and the new president’s vision. Their sound leadership helped make greatness part of the conversation. I wanted to be part of the journey, even though I had no idea what the destination would be.”

"I wanted to be part of the journey, even though I had no idea what the destination would be.”

Today, as vice president of corporate partnerships, he leads the team’s sales, development and partnership efforts. His accomplishments include landing the largest naming rights project of its kind with JPMorgan Chase, as well as partnerships with Google Cloud, PepsiCo and others. Kitts and his team consistently win NBA sales and marketing awards and have received the most honors among all league teams in four of the past five years.

Through it all, Kitts emphasizes the importance of building connections. “Network to help others in a way that makes you a resource,” he advised. “Focus on being interested, instead of interesting, and your network will become full of authentic connections who are willing to help you.”

Kitts’ relationship-building skills led to a particularly noteworthy partnership between the Warriors and e-commerce leader Rakuten—a deal reportedly worth $60 million over three years.

“A partnership is a two-way street with mutual benefit,” he said. “Our relationship with Rakuten is a best-in-class example of that. When you have shared values and vision, you are aligned on guiding principles and can agree on strategic key performance indicators. You may have to change course, develop new ideas, or even change the desired output—but with a strong foundation, you can still make it work.”

It’s award-winning advice, for business and for life.