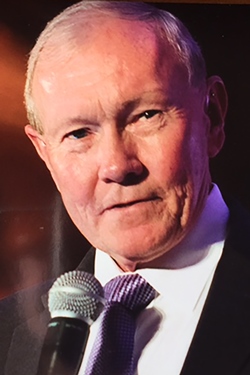 WEST PALM BEACH – Gen. Martin E. Dempsey, chairman of the Joint Chiefs of Staff (2011-2015) and chief of staff of the U.S. Army (2011), is The LeMieux Center for Public Policy speaker Thursday, February 8. His lecture topic will be, Leading Organizational Change: Capturing Innovation and Efficiencies While Operating in Complexity. Register for this event here.

Dempsey retired after 41 years of military service. During his time in the army, he commanded a cavalry troop, a tank battalion, a cavalry regiment, a tank division and United States Central Command where he was responsible for securing U.S. interests in the Middle East and South Asia.

His military awards include the Bronze Star, the Defense Distinguished Service Medal and Distinguished Service Medals from the Army, Navy, Air Force and Coast Guard. In addition, he has awards from other departments in the United States Government including the Office of the Director of National Intelligence, the Central Intelligence Agency and the National Security Agency.

He is a 1974 graduate of West Point and has master’s degrees from Duke University in literature, the Army Command & General Staff College in Military Service, and the National War College in National Security Strategy. He holds an honorary doctorate degree in law from the University of Notre Dame.

In 2015, Dempsey was named one of the 100 most influential leaders in the world by TIMEmagazine, was inducted into the Irish-American Hall of Fame and received the Ellis Island Medal of Honor. In 2016, Queen Elizabeth II made General Dempsey an Honorary Knight of the British Empire.

Dempsey’s post-military career includes a teaching position at Duke University in public policy and leadership, a role as special advisor to the commissioner of the National Basketball Association for leader development and youth programs, and as a motivational speaker through the Washington Speakers’ Bureau.

During the past five years, Dempsey has offered his leadership expertise to the chairmanship of USA Basketball, leading the team through the 2020 Olympics in Tokyo, Japan.

Dempsey and his wife, Deanie, have been married for 39 years. The two served in the military as a team, as Deanie was instrumental in supporting military family programs. The couple has three children and nine grandchildren. Each of their three children served in the Army, and their son, Chris, continues to serve as a Major recently assigned to the Pentagon.

Palm Beach Atlantic University is a private, independent university offering undergraduate, graduate and professional degrees, with campuses in West Palm Beach, Orlando and online. The University is dedicated to the integration of Christian principles to prepare students for learning, leadership and service.