The King’s Academy is pleased to announce the hiring of Jeremy Evans to be its new Director of Athletic Performance Training. 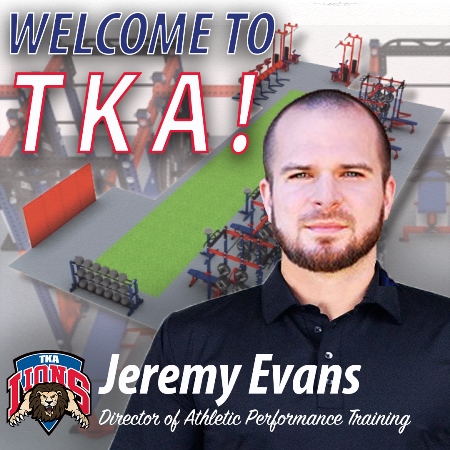 Evans joins the Lions’ staff after three years as a Performance Specialist at Exos Athlete Performance Institute on the campus of the Andrews Institute. Dr. James Andrews’ organization founded Exos as a world-class human performance center featuring the best in technology, facilities, and trainers. First-round NFL draft picks, Major League Baseball players, and Special Operations Soldiers are just some of the regular clients of Exos.

‘Coach Evans’ previous experiences position him to be able to incorporate the type of programming here at The King’s Academy that will maximize the athletic performance of our student- athletes. In the hyper-competitive atmosphere of South Florida, someone like Coach Evans gives us that edge we need.’ – Associate Athletic Director, Chris Hobbs

The school’s continued pursuit of ‘Excellence In Athletics’ took a step forward as Evans brings elite levels of education and experience to this new position. Evans holds certifications from the Collegiate Strength & Conditioning Coaches Association, USA Weightlifting, and Exos Human Performance. In his time at Exos, Evans has worked with 10 first round NFL draft picks, rehabilitated Special Operations Soldiers, and directed the programs for all middle school and high school athletes.

‘We are so excited to have a person like Jeremy and his elite background in athletic performance join our athletic department. His passion to have an impact on high school student-athletes was a big reason he appealed to us. Jeremy has worked with wide range of athletes from middle school students to the professional level. We believe he will know exactly how to get the most out of our student-athletes here at The King’s Academy.’ – Athletic Director, Adam Winters

The King’s Academy Athletic Department strives to use ‘excellence in athletics’ to have eternal impact on its student-athletes. A member of the Florida High School Athletic Association, the ‘Lions’ have claimed 112 district titles, 35 regional titles, and 10 state championships. Student-athletes at The King’s Academy have gone on to successful collegiate athletic careers at some of the most accomplished universities in the country as well as professional athletic careers in baseball, basketball, football, soccer, and volleyball. The campus features facilities that would rival many small colleges; these facilities include the Loveland Athletic Center, Kahlert Stadium, TKA's Track & Field Facility, and the Full-Page Aquatics Center. For more information about The King’s Academy Athletic Department, visit www.tkalions.net or follow on social media, @TKALions